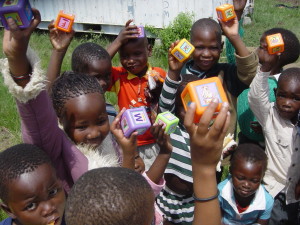 Thandanani has always recognised the importance of education, especially for the many vulnerable children we work with.

Approximately 68% of South African children under the age of 4 are not in Early Learning Centres or crèches, but are at home with a primary caregiver. When one considers that almost 80% of a child’s brain potential is achieved by the age of four, this is a fundamentally important time for these children in terms of their early stimulation & development.

Similarly it is well known that completing schooling significantly impacts on the longer term economic prospects and well-being of an individual. But while 99% of children in South Africa aged 7 to 13 are reported to be attending school, the attendance rate begins to drop from age 14 onwards and decreases more steeply from age 16 onwards. In 2012, 290,000 children of school going age were reported not to be attending school.

When families are unable to provide for the basic needs of their children, or when children are rendered vulnerable by the loss of one or more of their parents or a similar trauma the risk of children dropping out of school is significantly increased.

This is why Thandanani places significant emphasis on schooling in the work that we do. It is also the reason why we form partnerships with local schools, businesses and other organisations to promote education within the communities in which we work. This newsletter highlights some of our efforts in this regard. We hope that you enjoy the read!