My Long Walk to Campus 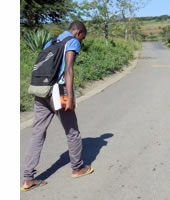 WHEN Xolani Mbuyisa was seven years old, his mother passed away and he was left in the care of his grandmother, Rose Mbuyisa. Over the course of the next six years, Rose lost all her children and was left as primary caregiver to four grandchildren, including Xolani. Her only source of income was the little she earned from washing other peoples’ clothes.

When Rose explained her situation to Thandanani, we began assisting her through our Family Strengthening Program. This program involves supporting families caring for orphans and vulnerable children over a three year period, with the aim of increasing their self-reliance and strengthening their ability to provide for the basic needs of the children in their care. Partly as a result of this support, Xolani was able to stay in school and complete his matric – with exemption – in 2011. 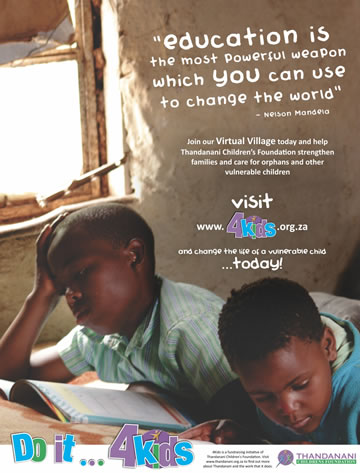 After matriculating, Xolani was accepted to study a B.Sc. at UKZN. His grandmother scraped together his registration fee and Xolani received support from the National Student Financial Aid Scheme to cover his tuition. However, as he had no money for accommodation, Xolani walked from his home in Slangspruit to campus and back each day to attend class – a round trip of some 18km.

“Xolani deserves this chance to succeed. Not only has he demonstrated remarkable determination but also remarkable compassion,” said Thandanani’s Director, Duncan Andrew. Andrew explains that during his final year, Xolani met another student who, like him, had nowhere to stay and so Xolani invited him to stay with his family.

When asked what drives him, Xolani said that he is determined to make a better life for his family. He no longer wants to see his grandmother struggle. He wants a better future for her and his cousins. He wants to set a good example and show that nothing is impossible if you are prepared to give it your all.